Standard
There have been discussions in various Thursday’s Children posts about music and how that helps the writing process.  I think a lot of us (and by us I mean writers) have playlists or maybe certain albums* that we listen to more when working on a specific project.  Sometimes we create specific playlists for each story.
But, have you ever been listening to a song and a line out of it speaks to you and suddenly you have a kernel of an idea forming?  Or maybe the whole story just jumps out at you from start to finish.
This didn’t happen to me recently, but I’m still working on the story that was the result of it, so I think it’s relevant.
Raise your hand if you remember the group from the 90’s called Veruca Salt?  Anyone, anyone, Bueller?
I wasn’t a particular fan of the band, I’m not sure I could even name one of their songs to tell the truth.  But after they split up their lead singer, Nina Gordon, put out a solo album.  I adore it.  It has gone many places with me over the years on various travels and I’ve listened to it countless times.  One day, probably four years ago now, I was listening to it and a line from one of the songs drilled its way into my head and stuck there.  Mind you, this wasn’t an obscure track, this was maybe the one and only single so I had heard this song hundreds of times, easily.  The lyrics are:
Down to the earth I fell
With dripping wings
Heavy things won’t fly
And the sky might catch on fire
And burn the axis of the world that’s why
I prefer a sunless sky
To the glittering and stinging in my eyes
(Nina Gordon – copyrighted 2000)
I heard that and boom, story!  I pictured an angel falling to earth by choice to remove himself from the battle for heaven.  He thought he could be persuaded to join the other side and if he did, heaven would fall.
That was just my first thought, but the idea has grown from there.  I have two great main characters and a mostly fleshed out plot.  I’ve been working on it off and on for a few years now, but one of my 2013 goals is to finish the first draft, finally.
That was a lot of rambling to get to the point of this post.  Have you ever found inspiration from something that you’ve heard/seen/read a million times before?  Something that wasn’t new but for some reason it spoke to you at that time.  I’m curious to hear (read, I suppose) your stories of any similar lightning bolts of inspiration.
*Just a side note, but what are we supposed to call albums now?  I can’t remember the last time I actually bought a physical product for music, so I know CD isn’t appropriate anymore.  Welcome to the digital age where nothing is tangible anymore. *Sigh*

Don’t forget to check out the Blog Hop, and join in, too! 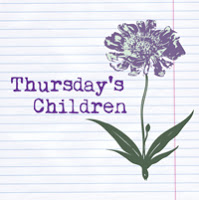 Here’s the code to the Linky to put on your own post.