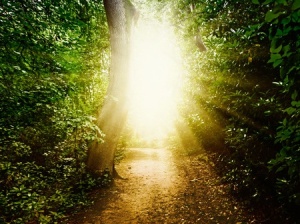 Apparently I died three months ago, but I just found out yesterday. I’d been wandering around the woods trying to find the way back to my car when I met a woman. She explained it all. I had fallen and hit my head and no one had found my body. But she had sensed my lost spirit and she was here to help me move on.

“What the hell,” I said. “It’s got to be better than walking around here,” I told her.

So, when the light appeared on the path between the trees, I took a completely unnecessary deep breath, closed my eyes, and stepped into it.

And man, I was not prepared for what I found.

I opened my eyes and found myself in my college dorm room. It was exactly as I remembered, down to the hole in the blanket on my roommate’s bed and the magnets on the mini-fridge. Turning around I caught my reflection in the mirror and groaned. Shaggy brown hair that looked like I had just rolled out of bed, a Weezer t-shirt, ripped jeans, and yup, Doc Martins. Apparently I was also back in college.

The door flew open and Rob, my roommate, came thundering in.

“Kyle, finally. Where you been man? We got to go, the party’s already under way. Ben’s waiting on us.”

Not knowing what else to do, not knowing what was going on, I followed Rob out the door. This was not what I had expected when I had decided to go into the light. Was this heaven? Had I somehow gone back in time? Was I actually here in the flesh? I pinched myself, it hurt but what did that really mean.

I continued to follow Rob across campus not paying attention to where we were going, trying to figure out what was happening. I looked up when I heard someone yell my name and found that we were standing in front of the Sigma Chi house. In that moment I knew exactly what was going on. I knew what day it was and why I was here.

This night had followed me for years, and I regretted almost every minute of it.

Not waiting for my friends I dashed up the steps of the house and through the front doors. I started looking everywhere for Amy, a friend that I had known since sophomore year. She was here somewhere, in the process of drinking too much. I had to find her and get her to leave as soon as possible.

Two hours later and I still hadn’t found her. The clock in the kitchen said 12:45, so I knew it was almost the right time. The time when I had made the worst decision of my life. It was clear to me now that it wasn’t an option for me to stop this before the fact. I had to change my actions this time, not the actions of others.

Heading up to the second floor I made my way to the last bedroom on the left, and pushed the door open. There I found Amy, passed out on the bed with three frat guys and Rob standing around her. Two of the guys were holding her arms and the other two, including my roommate, were discussing what they should do.

The first time I witnessed this I had tried to tell Rob he should leave her alone but after they threatened me, I had left. Four against one after all, right? Not this time. Without a word, I launched myself at Rob catching him by surprise and knocking him into the wall. I got in two good punches before the other three were on me. But I didn’t care. Before I blacked out, I saw other people running into the room at the commotion, helping Amy off the bed and getting her to safety. Maybe this is how I was supposed to die all along, but if so, then this was the right way.

When I opened my eyes, I was on the beach. The sun was shining, the water was a clear turquoise, and the sound of the waves was the most beautiful thing I had ever heard. This was heaven, this was my heaven. I had finally made it. I corrected the biggest mistake in my life and I was rewarded.

Click below to see what the others came up: